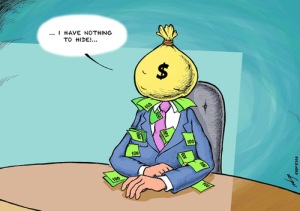 Our federal government is dysfunctional.  Everybody knows it.

Most people blame the polarization of politics in America today.  The Democrats and Republicans can’t agree on anything because they have deep ideological differences, right?

Maybe not so much.  Our entrenched political leaders in Washington – Democrats and Republicans alike – are less driven by ideology than they are by money.  This is nothing new, but it sure seems to be accelerating.

The untold secret, closely guarded by the press and the political oligarchy, is that politics inside the Beltway is hopelessly corrupt.  The average American assumes that lobbyists work for big, evil corporations seeking to buy political favors.   Sadly, the opposite is more often true.  Our political leaders live and breathe to extort money from corporations, fattening their campaign coffers and their own wallets by promising (or threatening) to pass (or not pass) legislation that will affect profits.  They write bills specifically for the purpose of shaking down a given company or industry – often writing and then erasing the same proposals over and over to generate fresh cash with each iteration.  Democrats and Republican leaders frequently collude on legislation, agreeing to pass it after all palms have been well greased.  Legislative leaders repeatedly stall votes until the appropriate ante has been paid.

Peter Schweizer’s book “Extortion – How Politicians Extract Your Money, Buy Votes, and Line Their Own Pockets” lays out the schemes in non-partisan detail.  Here’s an example:  In 2011 the Wireless Tax Fairness Act, written specifically to help AT&T and Verizon prevent local taxation on cell phone bills, was stalled in the House, waiting for a floor vote.

“Everyone expected Boehner, given his general aversion to raising taxes, to support the bill and hold a vote.  But as the months went by and mid-October arrived, it was unclear whether the vote would ever come.”

“Members of Congress from both parties had their hands out.  Employees of Verizon and AT&T wrote over two hundred checks totaling over $180,000 to the campaign committees of members of Congress during September and October of 2011.  Finally, he declared a vote for the bill on November 1, 2011, and on the day before the vote, Boehner’s campaign collected the toll: thirty-three checks from wireless industry executives, totaling almost $40,000.  Twenty-eight of those checks came from executives with AT&T.  The day of the vote, employees of Verizon sent twenty-eight checks to members of Congress.”

“The tribute had been paid.  The vote was held.  The Wireless Tax Fairness Act passed the House easily on a voice vote.”

Actually, the more polarized the Democrats and Republics seem to be, the more money they can raise.  They love conflict, and work hard to preserve it.

It’s called corruption.  But you will never hear the press talk about it, and to this point no candidate has mentioned it.

The framers of our Constitution didn’t build in malware that would stop corrupt individuals from taking financial advantage of their positions.  They relied on the voters to elect people of character.

We can’t afford to send one more corrupt or corruptible person to Washington.  We must fight to remove Pelosi, Boehner, Reid, McConnell and Obama.  Our last, best hope is the Tea Party – until we get principled people in the positions of leadership in Washington, DC nothing will change.

The Democrats and Republicans have played us for fools for far too long.

Everybody Plays The Fool – the Main Ingredient

3 thoughts on “Boehner, Reid and Friends Are Playing Us for Fools”