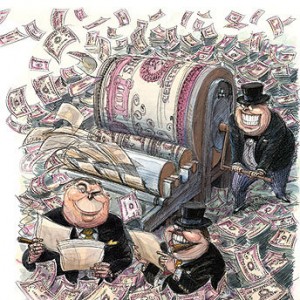 A year ago I wrote an article warning that Argentina, under bubble-headed socialist president Cristina Fernández de Kirchner, is headed for yet another financial disaster by printing artificial fiat currency, denying the reality of inflation by cooking the books, and failing to restrain runaway government deficit spending.  I predicted things would only get worse in Argentina, and we would be right behind them because our own bubble-headed socialist leaders are following the same script.

Argentina is in a world of hurt.  And so are we.  Our president told the nation this week that the state of the union is strong, and we are creating plenty of jobs.  But, he said, we must print more money to extend unemployment benefits again (beyond 99 weeks).  Only 63% of adults are active in the labor force.  A majority of Americans receive government checks.

Meanwhile, the Federal Reserve sucks up the wealth of those who have worked hard and saved money by holding interest rates to zero, passing it on to the mega-bankers.  They hold the Fed’s artificial dollars on their balance sheets and enjoy the risk-free interest, or play the stock and derivatives markets with their corrupt “pennies from heaven.”

As vehemently as our administration and the media deny it, we have a currency inflation bubble ready to pop.  We peasants should pay attention to the Argentine people.  They have been in this boat before and have developed strategies for dealing with their idiotic government.

One way they attempt to beat crushing inflation is to spend all of their cash as quickly as they get it.  Whatever one can buy with a dollar today will cost two dollars tomorrow.  Why hold on to cash?

Another strategy is to buy tangibles that will hopefully have some value to somebody in the future, even when cash has lost its value.  Real estate and gold are in this category.

But as predictable as the results are, they keep making the same mistake – they swallow more kool-aid, and elect more socialists.

They are the product of the same mistakes that have produced previous busts: uncontrolled government spending, heavy taxes on exports coupled with strict controls on imports and disincentives to foreign investors. Never learning from its mistakes, Ms. Kirchner’s Peronist party has pursued this course repeatedly, even as neighbors, including Chile, have soared past it in per-capita income by adopting free-market policies.  — Washington Post editorial board

Can we Americans learn from our mistakes?