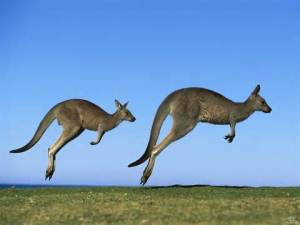 I spent a day with some friends from Australia last weekend.  It’s sad to say, but they were more engaged in and knowledgeable about American politics and economics than most fellow Yankees I meet.

We had riveting discussions comparing the political and economic situations of our two countries.  One thing became obvious right away – wage rates “down under” far exceed ours.  While the Aussie dollar and the American dollar are near parity, Australian laborers earn $25 or more per hour, while the norm in my American city seems to be about $12 per hour.  Australian professionals appear to earn considerably more than Americans do as well, but taxes take a pretty healthy bite, and prices are high on some items.

Our three guests were all government employees, yet they were very fiscally conservative.  One was a nurse who works for a government-owned and operated health care system.  She explained that citizens who purchase private health insurance can choose their own (presumably superior) doctors and care facilities.  No one is refused care at the public hospitals.

I was surprised to learn that the unions and government are combatants in Australia.  And my friends were shocked to hear about the circle of corruption in the US, where government employees’ unions get politicians elected in exchange for favors and more government jobs.  They wondered why they had not heard about some of the issues I presented, and I explained that for many years our news media have been bedfellows with the democrats, and their reporting is rigidly slanted in that direction (with the exception of Fox News, for whom my guests had no respect).  The Aussies are not impressed with the dearth of real news here, lamenting that they never hear their nation even mentioned in the media.

When we expressed our concerns about vote fraud in recent elections, especially in Montana, they described how their election system requires each citizen to vote – and failure to do so results in a hefty fine.  “We don’t use voting machines, it’s all done manually under great scrutiny,” we were told.

They weren’t pleased that their current prime minister, Julia Gillard of the Labor Party, was not elected by the people.  She assumed office in 2010 when her predecessor, Kevin Rudd, was ousted as the Labor Party leader.  “And she won’t be elected this September, either!”  they announced with firm resolve.  It bothered me greatly that until our visit I didn’t even know who the leader of Australia is.

We shared common concerns about the leftward (and downward) drift in education, and the over-reaching environmental movement.  They understood our worries about illegal immigration: “You mean your immigrants don’t have national identification cards?” they asked.  Of course their border is protected by a rather large ocean.

The big eye-opener for the Aussies was our commitment to the second amendment.  At age 30, one of our guests had never seen or touched a gun.  I showed her mine, and it was as if all the oxygen was sucked out of the room.  My wife and I explained concealed carry permits, and our belief in the fundamental right to protect ourselves, our families, and our property.  They insisted that the bad guys in Australia don’t have guns, so the good guys don’t need them either.  I hope they are right about that.  In our case, unilateral disarmament would be suicidal.

Our friends are well aware of the United States’ tenuous economic condition and our stifling $16 trillion dollar debt.  We pondered where is the “best place” to be, economically and politically, in a world where trouble lurks in every corner.

“We think we have it pretty straight,” they said.  I couldn’t disagree.

Livin’ in a land down under,
Where women glow and men plunder,
Can’t you hear, can’t you hear the thunder?
You better run, you better take cover!

Land Down Under – Men at Work

2 thoughts on “Livin’ In a Land Down Under”