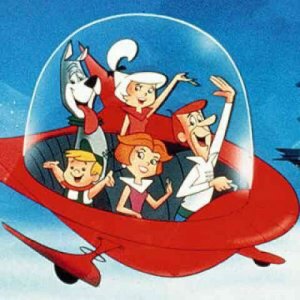 Sometimes we fuss when things don’t go the way we want, and we wonder if we are stuck with life as it is.  We tend to forget that before long, everything will have changed.

My wife’s grandfather told the most amazing stories about his life in the early 1900s.  He recalled with startling clarity a lifestyle before electricity, air conditioning, and air travel that was simpler, if not necessarily better.  I asked him one time if he missed the ‘good old days’.

“Good old days!”, he howled.  “We had mud and horse shit in the streets!  THESE are the good old days, and don’t you forget it!”

I have heard it said that the rate of change accelerates over time.  I don’t even know how change can be measured – there is no unit of “change” – but it seems to be true.

We know change will happen, but attempts to predict the future usually fall flat.  Didn’t you think that by now we would be flying around like George Jetson in little air-mobiles?  Pushing a button in the wall for instant breakfast?  Seeing and talking to each other on little flip phones?  Oh wait, we have that.  Well, one out of three ain’t bad.

Some change is disturbing.  We put a man on the moon 44 years ago, but we can’t do it today.  We built the Empire State Building in 410 days but it now takes longer than that just to get the required permits for a minor construction job.  We have deteriorated physically into a nation of jelly-bellies.  The average student gets a worse education every year and many don’t finish high school.  And it saddens me that laws are selectively enforced and the miracle left us by our founders, the Constitution, is being shredded.

Most surprising to me in the second half of my life is the rapid social change, and especially the blurring of the sexes.  I sat in a fast-food restaurant recently near a group of high-school kids.  It was a scene right out of “Glee”.  The boys and girls were nearly interchangeable – giggling about everything and nothing, alternately poking at their smart phones.  They dressed the same, they sounded the same, they acted the same.  As they got up to leave, it was hugs all around, boys hugging girls, girls hugging girls, boys hugging boys.

The old macho “boy gets girl” world of my youth is history.  Marriage is old-school – not necessary.  Child-rearing by one or more females is the norm.  Gone are the days when a young man was expected to get a good job, move up the ladder, and bring the “bacon” home to his wife and family.  Women serve in combat units and television sit-coms are filled with lame gay humor.

Fortunately, change comes somewhat more slowly in Montana, a place where men are still men and women like it that way.  We still have brave and bright-eyed young people in our military.  Medical and emergency personnel still save lives every day, and good people do the right thing everywhere.

When candidate Obama promised hope and change, it was a sure bet the latter would come true.  Change is gonna come, but it usually does not follow the path anyone expects.  Things will happen that none of us anticipated.

So don’t fret too much about the way things are today.  It doesn’t always feel like it, but maybe these are the “good old days”.  And maybe they will get better.

2 thoughts on “Are These the Good Old Days?”