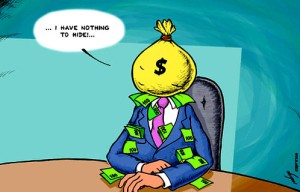 75% of Americans think our government is corrupt.   No kidding?

Everybody knows the game:

The corruption game is nothing new. Call it payola, quid pro quo, scratch my back – it has gone on ever since the first government came into being, and still occurs all over the world. In Mexico and similar “banana republics” nothing gets done by government without illegal payoffs.

No, the corruption game isn’t new, but the playbook has changed. Until recently, corrupt deals were made between public officials and private businesses. That arrangement was problematic – when the public found out about massive corruption (back then we had real journalism) the citizens would raise hell until the corruption was at least somewhat beat down. They didn’t like their tax dollars going to fat cat big business operators. But corrupt politicians didn’t appreciate these temporary interruptions in the game. So instead of using corporate cronies to fatten their wallets, they learned to cycle the dirty money through government employee unions, quasi-government organizations and NGO’s (non-governmental organizations) instead of private businesses.

This week’s scandal du jour is the uproar over Planned Parenthood’s use of taxpayer money for purposes that most citizens find repugnant. The dollars aren’t huge – only a half a billion or so – but what they do with the money sure has a lot of taxpayers’ underwear in a knot. Moreover, Planned Parenthood uses a good chunk of the money for campaign contributions and lobbying. They claim the government funds they get are applied only to honorable pursuits. But we all know that money is “fungible”.

Remember Fannie Mae and Freddie Mac? These behemoth quasi-government organizations almost buried our economy in 2008 when the real-estate bubble of their creation popped and the government bailed out the big banks. Even President Obama, a master of quid pro quo, called the Fannie Mae / Freddie Mac business model “heads we win, tails you lose.” We really still haven’t recovered. But the Fannie and Freddy corruption machine keeps chugging along, making big contributions to campaigns, paying monster salaries to its officials, and playing fast and loose with taxpayer money with almost no oversight.

Government employee unions are now the largest group of contributors to political campaigns. What a concept: the unions contribute taxpayer money to the very politicians who promise to protect their jobs and raise their wages. Jefferson would have loved that one.

Another cool quasi-government corruption setup is the Export/Import Bank, which uses taxpayer money to make risk-free loans that benefit crony corporations like Boeing, General Electric, and Caterpillar, to foreign governments and companies, some of whom actually compete with other domestic companies. There are all kinds of opportunities for bank employees to profit personally from shady arrangements. Some honest legislators, prodded by conservative constituents, may have finally put an end to this game, although General Electric and their political partners in crime are trying hard to keep it going.

And it’s not just about dirty politicians seeking campaign funds any more; federal agencies are in on the act. They now extort funds from US companies by threatening huge fines for trumped-up regulatory violations. Agencies like the EPA, FCC, NLRB and others routinely set up schemes that trade a “consent decree” (an agreement to not destroy a business with a long, expensive legal action) for cash. The feds also use consent decrees to take control over local government operations, such as police departments and local utilities.

Some federal corruption is simple and creative. Conservatives in Congress were furious to learn that VA Administration bigshots received big bonuses by faking the real performance records of their agency while patients died waiting for care. When the congressmen found out these guys could not be fired (this belongs in Ripley’s Believe It or Not!) they passed a law that making it possible to fire VA officials. So how many were fired? You guessed it. Zero.

The exploding corruption culture in Washington, DC is not a partisan issue – both Democrats and Republicans say they oppose corruption, but only a few true Conservatives are making any effort to do something about it. Leading Republican presidential candidate Donald Trump admitted paying off politicians. One can only assume the practice would continue under his watch.

One thing hasn’t changed. The only way to kill corruption, or at least slow it down, is for citizens to raise hell about it.

Ask your public officials and candidates what they plan to do about corruption. Give them specific examples. Most of them don’t mention the issue and haven’t even thought about it. Let’s raise a little hell.

If You Want To Get To Heaven –
Ozark Mountain Daredevils

Another great seventies band, still on the road, gray hair and all, bangin’ on guitars!