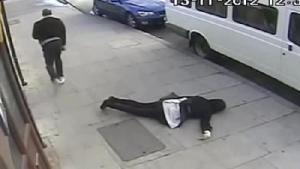 Americans are sickened by news reports of the “Knockout Game”, in which a young black thug, or a group of thugs, sneaks up behind a non-black person and knocks him or her out with a sucker punch.

No, my reporting the fact that the perps in all of these crimes have been black does not make me a racist.  Facts are facts.  But most of the national media (except USA Today and Fox) is apparently afraid to make that point, referring to these chicken-bleep creeps as “wandering youths” instead of calling them out as what they are: black street thugs.  Of course if a white street thug clocked a black Grandma, the media would have apoplexy.

CNN calls them “teens” and decries “youth violence.”  ABC says they are “criminals” and refers to them as “kids”.

Reverend Al Sharpton (I really want to attend his service some Sunday, where is his church again?) took to the airwaves and made a half-hearted statement: “No matter who it is . . . we must denounce it.”  Huh?  We know who it is, Reverend!  It’s on video!

Wouldn’t it be great if our “post-racial president” would get in front of a microphone, sans teleprompter, and call out the black moms and dads who raised (or failed to raise) these monsters?  Their DNA is in the blood and the fists of these bad-asses – do they have any remorse?  Do they feel responsible for the acts of their “children”?  Is anybody accountable for anything any more?  Obama was quick to excoriate George Zimmerman, at the time believing premature press reports that a white guy had attacked a poor defenseless black kid.

And is it any coincidence that these attacks take place in cities where it is illegal for any citizen to carry a gun for self-defense?  You can bet that if a pedestrian witnessing an assault like this popped the perp with a .38, he would end up in the penitentiary.  But if these “youths” knew it was a possibility, there might be some deterrence.  A knockout game in Lansing, MI went awry when the victim shot the perp twice.

The “Knockout Game” is not new, but it is gaining in popularity.  Colin Flaherty wrote a grim report about the black mobs terrorizing St. Louis with impunity in the summer of 2012.   And local residents were none too pleased that their local news outlets refused to report the clearly racial motivations of the thugs.

We all hoped that the election of our nation’s first black president would finally, once and for all, end racism.  Like almost everything else about life in America over the last five years, it has become worse.

One thought on “I Get Knocked Down – But I Can’t Get Up Again!”