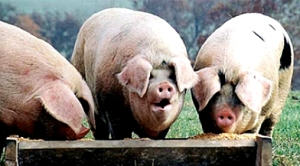 “For too long, these companies were allowed to make huge profits buying mortgages,” Obama said Tuesday, “knowing that if their bets went bad, taxpayers would be left holding the bag . . . It was ‘heads we win, tails you lose.’  And it was wrong.”

In 2008 you were at the head of the Freddie/Fannie trough, sucking in a cool $165,000 for your campaign.  In ten years Fannie Mae slopped over $100 million into that trough, quickly gobbled up by corrupt Democrats and Republicans alike. Nobody wanted to blow the whistle, for fear of losing their place at the trough.  “Fannie and Freddie had Congress wrapped around their fingers,” said Guy Cecala, CEO of Inside Mortgage Finance, which publishes trade publications following the mortgage market. “They were untouchable.” (CNN-Money)

The top officials of Freddie / Fannie were caught cooking the books, and to this day the taxpayers are still footing their legal bills.  Meanwhile Fannie’s biggest piggie, James Johnson, took in a cool $100 million in wages over nine years; ridiculous salaries and bonuses flowed throughout both organizations.

Ten years ago the Bush Administration, seeing the looming disaster, tried to step up the oversight and get Freddie and Fannie under control, but failed as Barney Frank and virtually every other pig at the trough circled the wagons to protect their interests.  The Obama administration was sued by Judicial Watch in 2009 for access to records which would prove Congress did nothing for years, even while knowing the extent of the corruption.

The pig sty stench came to a crescendo when the taxpayers were forced to refill the trough with a $200 billion bailout, and that doesn’t begin to contemplate the liabilities still on the Freddie/Fannie books, which the Congressional Research Service estimated at $4 to $5 trillion dollars a couple of years ago.

So, President Obama, and all you other pigs who have gorged at the taxpayer-funded trough for all these years – DON’T YOU DARE act sanctimonious about finally taking baby steps to clean up your stinking pig sty.  You should all be ashamed.

In their styes with all their backing,
They don’t care what goes on around.
In their eyes there’s something lacking,
What they need’s a damned good whacking!