With so much recent talk about the rich, the poor, and fairness, maybe we should take a deeper look at wealth in America. 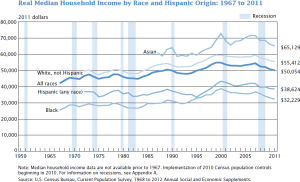 Real median household income in the US is about $50,000 per year.   This includes wages, business income, and most forms of government assistance.  Household income is roughly the same as it was in 1989, adjusted for inflation, after declining about 8 percent since President Obama took office.

There are many ways to categorize people by income.  Location is one – Maryland residents top the list in per family income, largely because of the number of federal employees who work nearby in the nation’s capital.  Montana ranks 44th.

One’s race, unfortunately, still affects income, with Asians doing the best and blacks worst.   Education is also a factor, and the earnings curve between high-school dropouts and those with advanced college degrees is steep.

Statistics like these might suggest that we are doomed by our birth demographics.   Not so.  Consider that one of the biggest factors in one’s earning power is age.  Younger people earn less – it’s just a fact of life.  Younger people have less education.  The average age of minorities is disproportionately younger.  Age affects all the other classifications.

A recent shift in earnings and wealth is troubling – while the overall real median household income is somewhat stable, the income of workers has declined steadily as the income of those on government payments has increased.  Some of this is the result of the graying of America, but government assistance programs have expanded significantly.

Still, whether an American household (the term ‘family’ has become obsolete with the demise of the institution of marriage) receives its income by redistribution from workers or directly from work, we live relatively well compared to the rest of the world.  Comparison of real income is difficult because of currency exchange and other factors, and there are many ways to measure wealth.  Only ten nations exceed our GDP per capita.  While it is often said that most of the world’s citizens live on less than $2 per day, per capita GDP statistics indicates otherwise.

Our poorest citizens live like kings compared to the average Indian or African.  We should ask why.  What do we have that these other nations don’t?  Many of them have tremendous natural resources – that’s not it.  I will not accept that people from other parts of the world are just born inferior to Americans.

The answer, to me, is obvious.  Our nation was built on the principles of free enterprise, unlimited opportunity, and limited government.   We overlook this fact at our peril, and unless we restore the culture of productivity our grandparents championed, our grandchildren will pay a dear price.

2 thoughts on “You’re A Rich Girl”