The more business-savvy people we get in government, the better.  Assuming they are there to serve rather than be served.

In order to succeed, or even survive in a competitive market, business managers have to take advantage of the best tools and knowledge available to them.  On the other hand, government does not have any competition, so our leaders and administrators can basically stink the place up every day and never face any consequences.

Last week one of the administration’s sharpest business minds, OMB director Mick Mulvaney, presented the president’s 2018 budget, and it was refreshing, to say the least.  Mulvaney called Trump’s plan “compassionate.”  Only this time, they are showing compassion for the taxpayers, by cutting out unnecessary and wasteful spending programs that have grown on auto-pilot for decades without appreciable results.  And the budget is balanced from year one.  Congress probably doesn’t have the cajones to get on board, but it’s a start.

Today I would like to offer a few tips and techniques from the world of business and finance that our government leaders should consider: 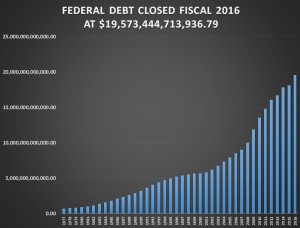 doesn’t eat all of your profit.  Fellow Tea Partiers:  remember when we were all worried to death about our national debt reaching $10 trillion dollars when Obama took office?  It is now just a hair under $20 trillion.   Picture a stack of $1000 bills 1,358 miles high.  Nobody seems concerned about it now, because the economy is recovering and there doesn’t seem to be any downside to spending more than we take in year after year.  But what happens when the Fed can no longer hold interest rates to near zero?  I’m afraid it won’t be pretty.  Congress must pass balanced budgets going forward.

• We hear a lot of talk about “creating jobs” and “spurring economic growth” by tweaking tax rates and policies.  There is one single tax item that makes every CFO salivate, even more than the corporate income tax rate.  It’s depreciation.  When a business hires an employee, it can deduct the cost of that employee immediately, reducing net income and taxes.  But when the company buys an asset, like a truck or a piece of machinery, it must depreciate that cost over a period of years.  It’s like paying taxes in advance, making a loan to the government for ten or twenty years.  If you want to see the economy take off like a rocket, just allow businesses to “expense” assets as they are purchased or to accelerate the depreciation.  This was a major feature of Reagan’s Economic Recovery Act in 1981 and the results were dramatic.  My company experienced explosive growth as a direct result of accelerated depreciation, and it was reflected in our employment and pay rates.  It was the strongest period of economic growth, both locally and nationally, in my lifetime.  My advice to Congress is to make accelerated depreciation the first order of business in tax reform.

• Business managers live and die by the performance of their employees.  They must be able to hire, retain, and fire employees at will.  Our government operates at a pace and performance level that would never survive in the real world, and this is largely because federal managers are not accountable for their union employees who basically can’t be fired.  We must either eliminate government unions or create a mechanism where government employees can be disciplined or fired.

• One sure-fire method businesses use to improve productivity is to take advantage of current technology.  Our federal government is ridiculously tech-deficient, and it’s no accident.  Government supervisors leverage power and compensation based on the number of employees they have, not what they accomplish.  To reduce the size and overreach of government, we must greatly reduce the number of government employees, sending them back to the private sector where they can produce something of value.  The fastest way to reduce employees and improve results is through information technology.

Here’s our chance to do it right.  Seminar over.  No charge.

Baby we can do it
Take the time
Do it right
We can do it, baby
Do it tonight!

Take the Time, Do It Right – SOS Band