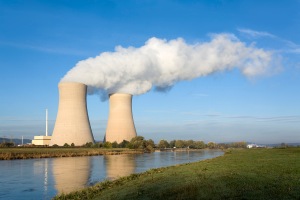 While developing nations strive to build nuclear power plants (and weapons), the USA seems to have lost interest.

Back in the 1960s and 1970s nuclear plants were popping up all over our nation, and conventional wisdom was that nuclear power would soon meet all of our energy needs at a bargain-basement price.  It sure hasn’t worked out that way.

It’s not that nuclear power was a bad idea.  In the USA nuclear power has proven to be clean, safe, and reliable.  But generating nuclear power is also fraught with challenges.  The cost to build nuclear power plants is daunting.  Nobody wants nuclear waste dumped in their back yards.  And disasters at Chernobyl and Fukishima, while preventable, have tarnished the promise of nuclear power as a primary energy source.

New technology in fossil fuels has reduced carbon emissions and production costs, making nuclear power just too expensive an alternative.  Technology in the nuclear industry has come a long way too, but you would never know it by looking at our domestic nuclear power plants.  The average age of our nuke plants is 36 years.  The last two reactors built were the Watts Bar units – one was completed in 1996, and the other struggled for completion in 2016.  Hundreds of approved plant projects never got started.  Only four plants are currently under construction, and they are behind schedule and over budget.  If they are completed, they will produce electricity that costs more than even solar and wind power.  A growing number of plants are scheduled to shut down.  Westinghouse went bankrupt trying to get its new lower-cost, faster-construction model up and running.

Our biggest gaseous diffusion uranium enrichment plant was closed two years ago, so we currently buy almost all of the enriched uranium used in our nuclear power reactors from Russia.  But Russia, in a snit over Obama’s Ukraine-related sanctions, suspended the trade agreement by which highly enriched uranium from weapons was being downblended for use in nuclear plants in the USA and around the world.

Germany intends to shut down all of its nuke plants by 2022.  China, on the other hand, is planning a number of plants as part of their effort to reduce carbon emissions.

Industry experts say that the world is already using more uranium than is being mined.  After the re-purposed uranium from nuclear weapons is used up, they expect hot competition and shortages as China, India, Russia and other nations ramp up their nuclear power programs at a rate greater than Europe and the USA wind theirs down.  No wonder there was a commotion when Secretary of State Hillary Clinton agreed to grant a Russian company the rights to mine one-fifth of our domestic uranium in exchange for a $2.35 million contribution to the Clinton Foundation and a $500,000 speaking fee for her husband.

We won’t need a great deal of expensive nuclear power to meet our nation’s future electrical needs.  But we will still need enriched uranium.  Our existing nuke plants will require uranium for some time yet, and the Trump administration wants to expand our fleet of nuclear powered ships and submarines.  Plus there is no avoiding our strategic need to maintain an arsenal of nuclear weapons.

“While the U.S. once led the world in this technology that contributed to our national security, we currently have zero domestic capacity for enrichment, yet Western Europe, Russia, China, North Korea, Pakistan, and even Iran maintain this capability. During the past decade, the DOE shut down the last domestic enrichment facility that was in position to ramp up deployment of an American technology. Now Mr. Perry has the thankless task of modernizing the weapons complex, upgrading aging infrastructure, and in some cases rebuilding entirely lost capabilities, such as enrichment.”   — Aaron Weston, director at the American Council for Capital Formation Center, and Norman Augustine, co-chair of the Nuclear Security Enterprise, quoted by Forbes

Dept. of Energy secretary Rick Perry and the Trump administration should give priority to addressing our abandonment of nuclear power and the resources required to produce it.

Here’s something fun – the girls are still burnin’, doin’ the Neutron Dance!  Check it out!