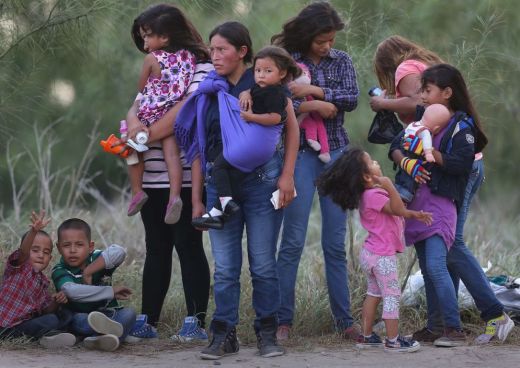 The assumption is that conservatives oppose illegal immigration and open borders because we are selfish.  Some say we just don’t want to share the wonderful opportunities and wealth in our country with outsiders.  Others call us racists.

Do I believe in “America First?”  Sure I do.  I think that American citizens should have first claim to jobs, schools, and taxpayer-provided benefits, and I know that in a world with poverty in every corner, the combination of open borders and liberal benefits for immigrants is unsustainable.

Closing our borders is not just to protect those on the inside.  Here’s the dirty little secret:

Illegal immigrants to our country are often abused.

Human trafficking is commonplace, and some who seek the good life in America pay a heavy price.  Many immigrants fork over their family’s life savings or even borrow money to pay coyotes and arrangers for their passage.  Forced prostitution and enslavement are more common than we would like to believe.

But even after an illegal immigrant has landed inside our borders, dangers abound.  Immigrant laborers often earn less than minimum wage, work long hours, and live crammed twenty to a room, unprotected by our laws and in fear of deportation.  Without education or language skills, they are easy prey for unscrupulous profiteers, both foreign and American.

Some time ago I reported that a beloved local businessman and school teacher, Jesse Campbell, was murdered at his home by Kevin DeJesus, an illegal Mexican who had worked for him as a laborer.  At first blush, it appeared to be another one of those “bad illegal immigrant kills innocent American citizen” episodes.  But here’s the rest of the story, reported in the Rock Hill Herald after the murder trial:

DeJesus’ lawyer said Campbell’s “secret double life,” of extortion for sex led to the vicious death. There was a struggle for a gun after Campbell forced DeJesus to perform a sex act, and refused to pay DeJesus for work done at the home, according to testimony.

Campbell had, in this case and at other times with other Hispanic men he hired, “refused to pay them unless they had sex with him.”

Dejesus will serve a 12-year sentence and then be deported.

Some will say that the solution to the abuse of illegal immigrants is to give them amnesty and full access to the protections enjoyed by American citizens.  But the only real-world solution is to prevent them from entering illegally in the first place, for a number of very good reasons.  A nation without borders and laws is not a nation.  It makes more sense to help other nations improve their own governments and living conditions.  And we can’t afford to care for the poor of the entire world within our borders when too many of our own American citizens struggle as it is.

We must seal our borders.  For our sake, and theirs.

I’d Love to Change the World – Ten Years After

Here’s Alvin Lee’s classic, from 1971 – a time that was a little less politically correct than today.