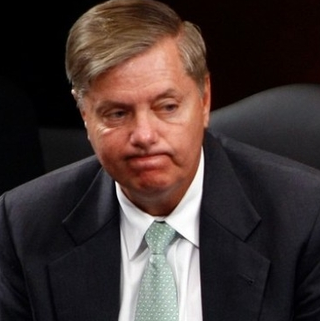 He’s the senior senator from the great state of South Carolina; a Republican who has held his office since 2003.  And yet very few people in his own home state can stand the sight of him.

One might ask, “How the hell does somebody like Lindsey Graham get elected in South Carolina?”  Well, it’s complicated.

You see, the last primary election in South Carolina featured six contenders for his Senate seat who filed as Republicans.  Five of them actually were conservative Republicans.  The sixth was Lindsey Graham.  Now, the Democrats knew they had no chance of winning the Senate seat in a conservative stronghold like South Carolina.  Fortunately for them, South Carolina has “open primaries”, where anybody from any party can vote in whatever primary they wish.  And the Democrats wished to elect Graham, knowing he will vote their way in the Senate most of the time.  They got him through the primary, and the general election went predictably easy for the guy in the “R” column.

At a time when Americans are dancing in the streets over the Trump-induced death of the liberal left, Lindsey doesn’t even pretend to be conservative.  He’s for big bailouts.  He busts his butt to preserve the corrupt corporate-crony Import/Export Bank program.  He leads the fight for amnesty.  After President Obama encouraged illegal immigrants to get out and vote, Lindsey excoriated President-elect Trump for even suggesting that vote fraud is possible.

Graham routinely supported even the most liberal nominees.  He scoffed at the Tea Party.  To everyone’s astonishment, he ran for President, but never advanced from the kids’ table in the debates, dropping out before spending any of his campaign funds.

There was a time when the Senator had one thing in common with Republicans – his support for a strong military and a generally hawkish outlook on foreign affairs.  But even that is no longer completely in step with recent conservative sentiments.  Strong military, yes.  Protracted and expensive engagement in foreign entanglements without an end game or any obvious American interests served, not so much.

Washington, DC can be a lonely place sometimes.  And Lindsey Graham may be the most hated man in town.

In a trap, trip I can’t grip
Never thought I’d be the one who’d slip
Then I started to realize
I was living one big lie,
She f***ing hates me

She Hates Me – Puddle of Mudd