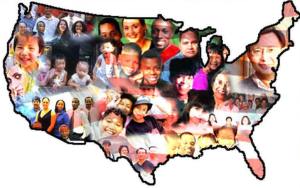 Standing in the checkout line at Costco, I watched and listened to the family in front of me chattering in a language that I couldn’t identify.  Was it Flemish?  Behind me a mother and her daughter spoke what I think was Hindi.  Another group of Indians near us was speaking English in their distinctive clipped dialect, and then a passel of giggling little Chinese kids ran by, with Mom and Dad sternly attempting discipline in their home language.  Then the pretty young Caribbean woman began checking out our groceries as two young Hispanic men worked the merchandise and carts and shared a joke in Spanish.

And it hit me like a brick.  The United States I had known all my life is no more.

I know, it sounds cliched, but I (conservative, Tea Party, mature white male) am not a racist.  I have no ill will or condescension toward any kind of people.  I have said I am an “economic bigot” – I expect capable people to work, and don’t particularly care for those who won’t, regardless of ethnicity.  But I enjoy the uniqueness of people from different places and cultures, especially the flavors of family interactions that are so universal – devoted parents raising their fun-loving kids.

No, I’m not a racist, but I couldn’t help but notice that American-born, English-speaking whites and blacks were outnumbered on that Saturday afternoon in that Costco store in a relatively affluent Charlotte neighborhood.

I was flooded with questions and emotions.  Do these foreigners also speak English?  Where do they work?  They seem to have plenty of money – were they wealthy in their native countries?  Are there here legally?  How did they get drivers licenses?  Do they vote?  Are their kids in the neighborhood schools, and how the heck do the schools deal with so many languages and customs?

Of course, no broad-brush answers apply.  Some speak English, some don’t.  Some have jobs, others are on government benefits.  Some are legal.  Some have drivers licenses.  Some vote.  One thing is for sure, suddenly there are a lot of them, as both legal and illegal immigration rates are exploding, compared to our earlier history.  Many states are importing more people than are being born to natives.

The United States will never again look and sound like it did during our lifetimes.  It is a done deal.

But we, as a nation, are still at a tipping point:  Will the values, social structure, and laws that made this country the most prosperous and powerful in the world survive?  Will our new immigrants become Americans who share the love of Mom, baseball, apple pie and Chevrolets, like earlier generations of immigrants?  Or will our great nation be split into hundreds of tribes, each clinging to their native habits, and suspicious of all the others?

It is a time in our history when leadership is critical.   Now, more than ever, we need leaders who care about the well-being of the nation, not just their own or their party’s political success.  We need honest men and women with an understanding of the importance of time-tested rules and practices.  America was built on laws that we could all agree upon, and that were proven to work.  And America was once a “melting pot”, where newcomers assimilated into our culture while preserving their own heritages.  Now is not the time to get fuzzy about our American laws, Constitution, or values.  Our immigrants need order and stability, too – in fact that’s what many seek by moving here.

My wife often complained that our home state of Montana changed radically as more and more people moved there from the west coast.  “They move to Montana because it’s better than California, and then they try to change it into California!”

In addition to accelerating legal immigration rates, our government has decided to erase our southern border and pretty much accept all comers.  They claim their motivations are humanitarian; some of us believe they are political.  But even if the border could be sealed like a Tupperware bowl tomorrow, the United States will never be the same as it was.  So now what?

Many of the newcomers don’t really know what made America great.  They and their families weren’t here.  It’s up to us remaining native Americans (by that I mean those of us born here) to stand up for American traditions. values, and laws.  We must make sure that our history is accurately and broadly taught, and expect our leaders to proudly defend our national identity and solidarity.

One thought on “They’re Coming to America”