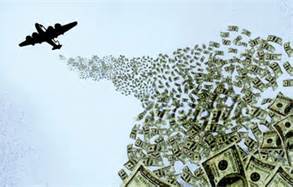 Last December you witnessed my rant about the ridiculous airline subsidies for “Essential Air Service” for small Montana cities.  I facetiously thanked you taxpayers for chipping in $3,652 for my (and every) 120-mile flight from Lewistown to Billings.

Apparently ridership increased from 1 passenger per day to 1.5, so the annual subsidy turned out to be just over $2,000 per passenger.  But here’s the good news:   Today the Associated Press reported that the Essential Air Service subsidies for Lewistown and Miles City are no more.  Unfortunately, the subsidies for the other Montana small cities were left in place.

Hooray!  Chalk up one small victory for the taxpayers!

Now, how many other wasteful, fraudulent, unproductive, and obsolete federal government programs are out there?  Hey, I know . . . let’s look first over at the IRS, who spent $4 million on a conference for 2,600 government workers, but can’t seem to figure out how to collect over $1 billion in past due taxes from federal govt. employees (did ya ever hear of payroll deduction?)

Maybe we should look into the estimated $2.5 billion in food stamp fraud, or the $1.5 billion spent for ObamaPhones.  Senator Coburn found $18 billion totally wasted in 2012 without breaking a sweat.  And then there’s ObamaCare.

That ain’t workin’.  That’s the way you do it.
Let me tell ya, them guys ain’t dumb.

Get money for nothin’, and chicks for free.

Money for Nothing – Dire Straits

2 thoughts on “Sanity Prevails (for once) – Crazy Airline Subsidy Ends”