The world needs a strong, determined, and righteous (dare I say Christian) United States to show them the way.  That’s not fantasy.  It’s not ego.  It’s just the truth.

Many Americans think the United States is arrogant to even suggest we know the path to peace, prosperity and progress.  They believe we must respect all cultures and tolerate all behavior, even if it makes us flinch.  Who are we to interfere?  The American left says we should “lead from behind”, if at all. 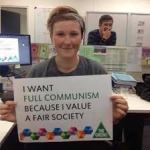 Our universities endorse socialism and communism, never mentioning the hardship and atrocities that history proves will inevitably result.  Our youth march in the streets to the beat of the hard-left drum, oblivious to the millions who have starved and died all over the world in lands where totalitarian despots ruled.  They close their eyes to the human misery, fearful of being called aggressive or intolerant.  Communism, to them, is the fair way, despite the fact that communists do not allow private ownership of property or personal choices.

Meanwhile, some on the far right feel that only dominant military power can maintain peace and order.  In their world-view, only regime-change can bring about progress, and it is counter-productive to dignify despots by meeting and discussing a path forward.  They must be defeated and removed.  Cynics would say the “neo-cons” also view military action as a profit opportunity.

After World War II our less-than-stellar military attempts at freeing the world’s oppressed have left us wary of investing more blood and treasure outside of our borders, and our military physique has atrophied while our adversaries, especially China, muscled up.

As a Christian nation, we know in our hearts that we can’t allow human misery to endure without trying to help.  Appeasing and supporting ruthless despots clearly isn’t going to change their behavior.  Threatening them doesn’t seem to work, either.  Is it hopeless to believe that America can lead the world away from despotism, starvation, and oppression?

President Trump has not given up.  After our nation’s repeated failures to suppress North Korea’s belligerent nuclear intimidation, Trump is meeting Kim Jong Un face-to-face, inviting him to join the civilized world.  The United States promises harsh sanctions and even threatens military engagement for bad behavior, but offers incentives for following the right path.  As the North Korean people get their first glimpse of sunshine, Trump’s approach looks promising.

Vladimir Putin has chafed under the embarrassment of Russia having been relegated to second-class status among the world’s leading nations.  President Trump, recognizing the opportunity to steer Putin’s behavior toward acceptability, chides the G7 leaders about leaving Russia out.  Trump will meet Putin soon, and I expect to see the G8 configuration restored, resulting in a win-win for Russia and the rest of the world.

Shortly after his election, President Trump met Saudi Arabia’s King Salman to share concerns and opportunities, and later recognized Jerusalem as the capital of Israel, changing the political landscape in the Middle East.  Suddenly the United States has strategic allies all over the area, ISIS has all but disappeared, and Iran may soon face a popular uprising to displace their despotic regime.

Meanwhile, China watches the United States re-asserting itself as the economic and moral leader of the world.  Trump demands fair treatment in international trade, and he will likely get it.

There can be no misunderstanding – the despots of the world are bad guys, and we must demand human rights for all.  But until we have a relationship, a conversation, an understanding of mutual benefit, life will not get better for the oppressed.

It’s up to the United States, and our president, to show them the way.