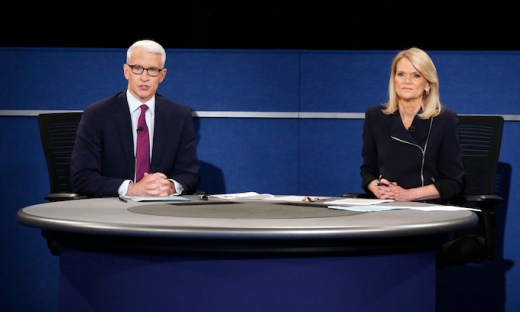 I asked my friend, a well-educated, successful business professional, if she saw the second Trump / Clinton debate last night.  She hadn’t.  She works long hours on the dead run, and has been caring for family members with health issues as well.

I know she is interested in politics, so I was giving her a “CliffsNotes” report of the political slugfest.  When I got to the part where Trump revealed how Hillary laughed about successfully defending the man who brutally raped a 12-year old girl in Arkansas, her jaw literally dropped.  “What?  Why haven’t I ever heard about this?”  The news she has picked up while on the run always describes Hillary Clinton as a champion and defender of women’s rights.

I explained how the news media avoids stories that might harm any Democrat, especially one as powerful as Hillary Clinton.  The days when reporters and editors went to great lengths to double-verify facts, and important news stories were never spiked, are long gone.  News outlets now report what fits their left-wing political ideology, or will enhance ad revenue.

This episode is by no means an isolated example of an important, but willfully hidden, news story.  It was first reported years ago and was revisited by the Washington Free Beacon in 2014.  But it never saw the light of day in the mainstream news media.  How many Americans know that we have a $20 trillion (and growing) debt?  Or that hundreds of “sanctuary cities” across the country routinely release illegal immigrant criminals without prosecuting them or turning them over to immigration officials for deportation?  Or that our FBI not only gave immunity to everybody who was complicit in Hillary Clinton’s dangerous and illegal storage of classified materials on her unsecured private server, they also helped destroy the evidence?  Or that the Clinton Foundation is far from charitable, having actually skimmed millions of dollars intended for disaster relief in Haiti?

This is just the tip of the iceberg.  Stories like these and countless others can be found on blog sites, investigative news sources, and sometimes Fox News.  But those who don’t have the time or know where to look for real news, or at least alternative reporting, are at the mercy of NBC, CNN, CBS, ABC, and PBS – all protectors and apologists for the political left.  And young adults don’t watch television news or read newspapers at all – their news comes via Facebook, Twitter, and SnapChat, filtered by left-leaning social media machines and the interests of their friends, who are products of our relentlessly leftist educational system.

My friend is worldly, intelligent, and caring.  She also very busy, like millions of other Americans who want, need and deserve to know the truth about our nation, its challenges, and the powerful people who seek to run it.  But the unholy alliance between the Democrat party and the corrupt liberal mainstream media has left her and most Americans defenseless and in the dark.  It feeds and breeds corruption.

Those of us who have the time and the drive to ferret out the news are duty bound to share it with our friends and families.  The only other way to challenge news media corruption is to elect outsiders to public office who will move in and drain the swamp.

You take no interest, no opinion’s too dear
You make the rounds and you try to be so sincere
You guard your hopes and you pocket your dreams
You’d trade it all to avoid an unpleasant scene

In the Dark – Billy Squier

One thought on “Corrupt News Media Leave Americans In the Dark”