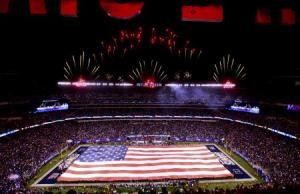 This week the poo hit the fan when Senators Jeff Flake and John McCain complained about the millions of taxpayer dollars going to owners of professional sports teams for the privilege of having patriotic, pro-military programs at their games.

Sports fans assumed, naturally, that team owners were providing the patriotic tributes to veterans and active-duty servicemen and women at their own expense, because they love the country that made them wealthy. A few owners do provide prime-time for free, but many don’t.  These owners are the same uber-wealthy team owners who make taxpayers build or renovate stadiums every few years, threatening to move their teams out of town if the taxpayers don’t build them more high-rent corporate luxury boxes. Would a guy who sells your kid a half-sized crappy hot dog for eight bucks give away five minutes of high-visibility pre-game for free?

But lest you think the owners are the only villains in this smelly episode, there’s more to the story.

Some years ago when I lived in Montana, I noticed that all of the college sports broadcasts were sponsored by the state Worker’s Comp fund.  I thought that was strange.  Why does the Worker’s Comp Fund buy advertising? Viewers of their TV ads can’t buy anything from Worker’s Comp.  Employers only buy worker’s comp insurance because they have to.

Then one day at a minor league baseball game in Helena I noticed the huge Worker’s Comp advertisement on the outfield fence. And when the announcer welcomed the several hundred Worker’s Comp employees who were attending the game on free tickets that day, the little light bulb over my head lit up.  All advertisers get free tickets . . .

I wonder how many seats the Montana state agencies own at Grizzly Stadium?  And how many NFL tickets at Fedex Stadium were bought by the taxpayers?  The Pentagon lamely defends their top-tier sports-venue expenditures as recruiting expense.  But the other mid-level government desk-jockeys who write checks to sports teams all over the country sure can’t use that excuse.

It’s not enough that bureaucrats at every level of government make more money, work fewer hours, and have less responsibility than the people whose money they throw around.  It’s no coincidence that career politicians like Hillary Clinton and Harry Reid become ridiculously wealthy while working as “public servants”.  No, this is worse:

They all get to sit at the 50-yard line while we are in the nose-bleed section, if we can go to the game at all!

Living large on somebody else’s money is a good gig if you can get it.

Take me out to the ball game!
Take me out with the crowd!
Buy me some peanuts and cracker jack,
I don’t care if I ever get back!

Take Me Out to the Ball Game – Pete Frampton

Pete’s take on the baseball classic: