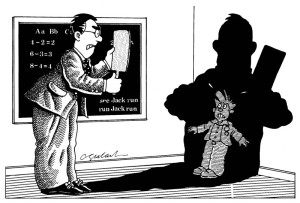 At Paris Gibson, all seventh grade boys were required to take wood shop class.  We actually didn’t do much in wood shop.  I think we sanded a stick of wood or something.  The wood shop was not there for teaching an employable skill.  No, the sole purpose for our wood shop – and our shop teacher – was to make paddles.

In the boys’ bathroom we exchanged rumors about which of the male teachers had the biggest, baddest custom paddle.  Mr. Anderson’s paddle has a three-foot long handle, like a baseball bat!  And Mr. Jones, the science teacher, had holes drilled in his paddle so there would be less air resistance and a faster swat.

I found myself on the receiving end of Mr. Jones’ paddle one afternoon.  Convicted of accepting a note during class from the girl in the seat behind me, I bravely marched to the principal’s office to receive my penance.  It didn’t surprise me that the girl who passed me the note didn’t get a swat.  In those days before women’s liberation there was a clear double standard.  But I was surprised and relieved to find that Old Jonesy’s paddle did not, in fact, have aerodynamic holes.

Just the same, it made a heck of a pop on my backside and cured me of any rule-bending intentions for the rest of the school year.

How times have changed.

Junior high teachers no long paddle the rear ends of miscreant boys.  They do, however, frequently engage in sex with them – here are a few hundred examples.

Today’s teachers are not allowed to raise their voices.  Instead, they are required to ask how it made the aggressor feel when he hurt that other student’s feelings.  Then the school psychologist orders up another prescription for Ritalin.

Memorization of historical milestones, math drills, and epic literature are now old-school.  Today’s Common Core students engage in group-think, anti-bullying crusades, environmental activism, and support for gays and lesbians.  They learn that conflict and questioning authority are abnormal and will not be tolerated.  Competition is okay, but only on the football field (just one kid gets to be quarterback, but every student is on the honor roll.)  Ingesting and retaining facts no longer matters; what counts is how well you get along with others.  How compliant you are.  Everyone should be the same:  Dull.  Nice.  Helpless.

They grow up perfectly happy to “spread the wealth around.”  They refrain from being judgmental, because the only virtue is tolerance.  Pregnant junior high girls are held in high esteem for their bravery.  Christmas is now “Winter Holiday”.

Back at Paris Gibson Junior High, you could pretty much tell who was headed for success and leadership.  They were usually the ones in the principal’s office getting a swat.

You come on with a come on, you don’t fight fair
But that’s O.K., see if I care!
Knock me down, it’s all in vain
I’ll get right back on my feet again!

Hit Me With Your Best Shot – Pat Benatar

7 thoughts on “Hit Me With Your Best Shot!”