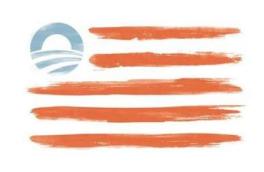 President Obama’s new logo/flag is getting a lot of attention.

Some think it is fresh, modern, cool, and a terrific marketing tool.  Hollywood actresses are now pledging allegiance to their saviour, Obama.  Others think it is the ultimate in narcissism, and a desecration of our sacred national symbol.

Word is it has already been pulled down after the uproar, so I thought maybe I would help out the prez and come up with a replacement.

Back when I was learning computer programming (which I still blame for my lack of hair) I got into the habit of putting a “slash” through the number zero. That way there is no confusion between the alphabetic letter ‘O’ and the number zero.  I still slash my zeroes.   Hey wait!  Whoomp, THERE IT IS!

My new Obama logo is crisp, easy to remember, and it’s versatile – it can convey two meanings:

(Here’s a good excuse to listen to one of the best songs from the 80s!)

Saved By Zero – the Fixx