On July 4, 1776, representatives of the States (not the nation) declared their 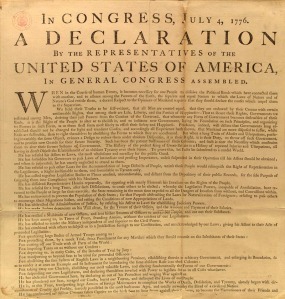 independence from King George and Great Britain.  The document they presented to the world included a list of grievances against the King that justified their bold action.

There are grand passages from the Declaration that are widely quoted and remembered.  But the part that interests me today is the list of grievances.  These guys were really ticked off, and with good reason.  It surprises me how many of these “repeated injuries and usurpations” against the States exist today.

“Let Facts be submitted to a candid world”, they began.  Each complaint in the list begins with “He . . .”, referring to King George.  I can’t help making a mental substitution.

Fortunately, we can redress our grievances today without the bloodshed our forefathers bravely endured.  We can again declare our independence by voting this fall to end the creeping tyranny that, left unchallenged, would destroy the freedoms our States have enjoyed for 236 years.

Tom Balek, Rockin’ On the Right Side

“Somebody Get Me A Cheeseburger!” – Steve Miller, ‘Livin’ In the USA‘