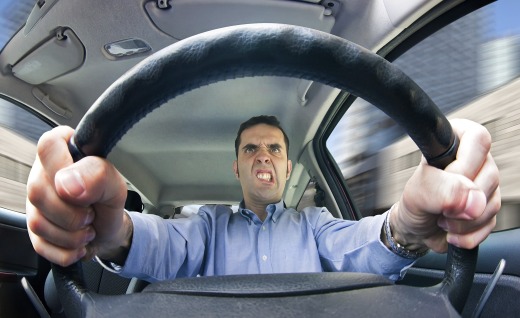 Is it just me or is bad driving an out-of-control epidemic?

I know people have complained about bad drivers since cars ran on kerosene.  But I swear, in the last year or so, I am seeing auto insanity at a level I never thought possible.

A couple of days ago I drove over the bridge to Charlotte and back.  20 miles each way, through suburban and city traffic.  The stuff I saw on just that one trip would have set my hair on fire, if I had any.

First there was the Scooter Jerk.  The heavy traffic on our four-lane expressway had slowed in one spot to maybe 15 mph, but the Jerk figured he shouldn’t have to wait in line like everybody else.  So he gunned his little machine to its pathetic full speed, squeezing his little scooter butt between the two lanes of commuters and truck drivers, down the dotted line to his important destination.  Drivers honked and beeped their displeasure to no avail.  But then the congestion cleared and the traffic resumed its normal 55 mph pace.  Except for everybody in the right lane.  We were all stacked up and cussing behind the Scooter Jerk, who was maxed out in the middle of our lane at 30 mph.

I finally got past the little Jerk and was cruising at posted speed, singing third harmony with Tom Petty.  Until I had to jam on the brakes to avoid hitting a Nascar Ass Car.  These guys are all over the place.  They can’t tolerate being behind anyone, so as soon as a car-length opening appears in the adjacent lane, they dive into it to gain a couple of feet advantage.  No turn signal, of course.  Hell, Kevin Harvick don’t need no stinkin’ turn signals!  The Ass Cars slalom down every road, weaving back and forth through the lanes, squeaking by bumpers and fenders.  After all the Nascar maneuvering, they might get to work 50 seconds earlier.

The light just ahead of me turned yellow, so I pulled my big red Ram to a stop.  But the Redlight Rummy behind me had other plans.  He ripped his steering wheel to the right, lurched around my truck and half off the street, and zoomed through the red light in front of me just in time to avoid getting clipped by the crossing traffic.  I really thought it was gonna be a T-Bone, and I don’t mean steak.

Running red lights is an art form around here.  Nearly every time I stop at a red light two or three brainiacs continue through the intersection in the other lanes.  The drivers behind me are ticked off at me.  “Doesn’t that bozo in the red truck know there’s a three-second safety buffer between the red light and the green going the other way?”  And remember the “right on red” rule?  Did you think you were supposed to stop first before you turn right?  Me, too.  Boy are we suckers.

Many of our streets have two lanes in each direction, and a center lane that can be used to turn either left or right in the middle of the block.  At least that’s the plan for most of us.  The privileged Center Lane Simpletons think it is their own private express lane, driving down the middle for blocks or even miles at high speed and giggling at how stupid the rest of us are for staying in our lanes and waiting our turn.

It’s anybody’s guess why bad driving has become so commonplace, so suddenly.  Maybe it is rebellion against Trump and any other authority.  It could be we have a new generation of drivers who grew up on participation awards and continuous self-esteem building who can’t be bothered with traffic laws that might interrupt their social media participation.  Our silly rules just don’t apply to them.

Maybe cops overlook traffic infractions because 1) they don’t want to risk offending anybody, 2) they don’t get paid enough to put up with crap from self-centered narcissists, 3) they don’t want to get shot, or 4) the last traffic citation issued in the U.S. was in 1986 and they have forgotten how to write a ticket.

My advice for a long and happy life:  when the light turns green, count to five, and then look both ways before you start.

Roxanne, you don’t have to put on the red light
Those days are over . . .
You don’t care if it’s wrong or if it’s right