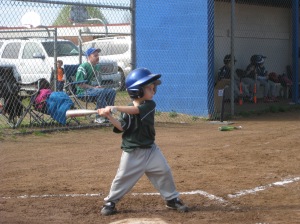 My grandson just turned five, and that entitles me to coach his little league baseball team.  It’s Grandpa Heaven.  Our first game was last Saturday.

At this age, the coach pitches to his own players and if they can’t hit it after five good pitches, they hit from a tee.  My grandson smashed my first pitch into deep center field, but I digress . . .

I didn’t expect a baseball game for five-year-olds to have a political slant.  But it sure did.

Our team took the field first, and the other team sent up their first batter.  He hit a grounder to our first baseman, who stepped on the bag for the first out.  But instead of returning to the dugout, the batter stood on first base, held there by his coach.  My other coaches and I looked at each other, confused.  Our players looked at us wondering what was going on.  We told the opposing coach, “Hey!  That kid is out!”  (There are no umpires for T-ball.)

The second batter hit a grounder to our pitcher, who tossed the ball to first base.  Out number two.  But no, the coach left both runners on the bases.  We didn’t put up a fight at the time, because it was our first year coaching in this league, and the other team’s coaches seemed to be veterans with authority.  “This is the way we play in this league,” they barked.  We had been given the leagues “rules” before the season started, stating, “There will be a maximum of 5 runs or 3 outs per inning, whichever comes first,” and “An out is an out.  Player must leave the field of play.”  Apparently rules mean as much to these dads as the Constitution does to President Obama.

This morning I wrote a note to the coach of our opposing team next week, asking him to agree that “an out is an out” in our upcoming game.  I explained that the kids were confused because rules weren’t enforced, and many of them were getting really bored because every play had the same outcome.  I copied my email to the league’s director.

That started a flurry of emails.  Turns out the league director is a knuckle-headed liberal who thinks that it is more “fun” for the kids to never fail than it is for them to actually succeed.  I pointed out that kids, especially at that age, need order and structure. They want to know what they are supposed to do.  What’s the point of throwing the ball to first base if the runner is always safe? And why bother to run hard to beat the throw if you will be safe anyway?  The “putout” is fundamental to baseball.  There is no game without it.  And besides, what is more fun than getting a legitimate base hit, or a putout?

The director, of course, launched into the predictable liberal tirade about the evils of competition.  “Besides, kids at this age never put anybody out anyway,” he claimed.  That got my daughter (assistant coach) into the fray.  “Our team made five putouts in the first inning, three in the second, and two in the third!” she countered.  She was a very competitive athlete in younger years, and was obviously keeping score, mentally.  “The other team got several putouts too.  So did the teams that played after us.”   She, too, pointed out that the players were getting bored because every play had the same outcome.

The director said he would think about it.  But I’m not optimistic that the integrity of our T-ball league will be saved from a liberal fate.

Why do liberals think they have the only correct understanding of fairness?  How fair is it when you put a kid out at first base and he gets to stay there anyway? A “game”, by definition, is a competition with a winner and a loser. Results. Consequences. Reality.  No consequences, no game.

Imagine the NCAA championship game coming up in a couple of weeks.  Every player gets to take the same number of shots.  Every shot is good for two points, whether it goes in the basket or not.  But nobody keeps score anyway, because it might make somebody feel bad. Do you think anybody would pay to watch?  Or want to play?  Even a five-year-old knows that’s just plain stupid.

** UPDATE 3/28/15 – our little “protest” worked – with support from other parents and coaches, we got the league director to enforce the rule.  Starting today, in our little kids baseball league, “an out is an out.”  Victory!

Just to hit the ball, and touch ’em all
A moment in the sun
It’s a-gone and you can tell that one good-bye!

2 thoughts on “Liberals, Please Don’t Ruin Sports For Our Kids”