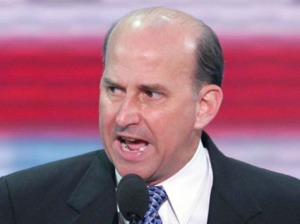 Finally – FINALLY a Republican congressman showed the courage and intelligence to stand up to Speaker of the House John Boehner.  It’s Louie Gohmert, from Texas.

On Fox News today Gohmert said, “I’m putting my name out there today to be another candidate for Speaker.”  He voiced his frustrations with Boehner, the same ones we all share, saying, “’You deceived us when you went to Obama and Pelosi to get your votes for the Cromnibus. You said you’d fight amnesty tooth and nail. You didn’t, you funded it!”

There is considerable discontent with Speaker Boehner among Republicans.  A recent poll showed 60% of voting Republicans want him out.  But more importantly, GOP Congressmen are tired of leaders who only show strength against their own members and never against the opposition.  Many representatives have hidden beneath their desks, fearing loss of committee appointments and campaign funds if they fail to toe Boehner’s line.  Some who opposed him in the past have paid the price.

Now those who have been hiding in the shadows can come out without fear.  A dragon-slayer has stepped up.  Many young conservatives ran for, and won, their seats on the promise of opposition to Boehner and the DC insiders.  Finally, they have veteran leadership.  All that’s needed is for 29 members to vote in the first round for somebody – anybody – other than Boehner, and a real election for Speaker will follow.

The fear of reprisals is so lame and short-sighted – if you are tired of getting bullied around, kick the bully the hell out!  Punch back for a change!  Simple, isn’t it?

So-called “conservative” congressmen who vote for Boehner this time around will have plenty of ‘splainin’ to do!  Let your rep know before Tuesday’s vote that you are watching.

God blessed Texas with His own hand
Brought down angels from the Promised Land
Gave them a place where they could dance
If you wanna see Heaven, brother, here’s your chance
Well, I’ve been sent to spread the message
‘God blessed Texas!’

One thought on “God Bless Texas – for Louie Gohmert!”