The Montana Dept. of Justice sure has a beautiful new website.  The first link on the DOJ’s main web page takes the user to a slick advertisement for Steve Bullock, Democrat candidate for governor, paid for by Montana taxpayers.  Beneath a huge photo of the handsome, smiling attorney general are glowing reviews like this:

A native Montanan and father of three, Bullock aspires to make Montana safer, especially for children and families. At the beginning of his term in January of 2009, Bullock identified four priorities and has worked with lawmakers, local law enforcement officers, therapists and others to turn his ideas into results.

His employees sure did a top-quality job on that web page.  And how nice that he cares about the children (see this post).

Wouldn’t it be nice if Bullock’s staff would work as hard at keeping license plate numbers straight? 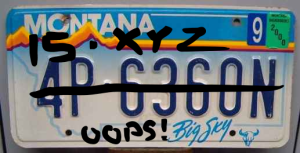 A year ago at a meeting of the Legislative Audit Committee, the DOJ admitted that even though they were “aware” of numerous data integrity problems in their new (2009)  $28 million Merlin computer system,  they had not yet made an effort to correct the errors.

The performance audit for 2012 included transaction testing and interviews with staff, county employees, and patrons.  The auditors reported that many errors occurred during the conversion process from the old system that were still not fixed at the time of the audit.  Other problems resulted from  a program “sequencing error” in 2011 which was subsequently corrected, but the bad data remains.

The auditors pointed out that the lien information on many vehicle records was faulty – the MVD had failed to remove liens from registrations when they were paid, or when a vehicle registration was transferred to a new owner.  Nice.

But even worse, the audit identified over 78,000 duplicate license plates in the Merlin system.  State Senator Eric Moore found that his gooseneck trailer was identified as a red Chevy truck – stolen, by the way.  One can only imagine the havoc these duplicate plates and numbers have created for vehicle owners, insurance companies, and law enforcement officers.   Still, Bullock’s staff isn’t in any big hurry to get the problem solved.  They hope to have “a substantial part of the project done by November of 2012.”

In his defense, I guess Bullock doesn’t have a lot of spare time to supervise his Dept. of Justice operations.  I mean, there are all of those Democrat fundraisers to attend.

Hey, I know!  Let’s get the state employees who designed the “Bullock for Governor” web page on the DOJ website to work on the Merlin system!  They obviously know what they are doing!