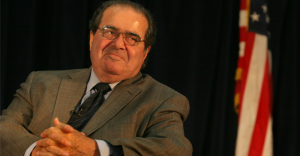 Now we have lost Supreme Court Justice Scalia, the last and best guardian of the Constitution.  And you know — you just know — that the weak-kneed, self-serving GOP establishment Washington, DC cartel is going to cave in and give President Obama his replacement.

Afraid of appearing to be “mean”, lest the people who don’t vote for them anyway will dislike them even more, these DC weenies are still in the lineup despite batting .000 in the National Negotiation League.

I am one of the small handful of people who still listens to Michael Medved’s radio show; there are few choices in the wee hours of the morning.  Medved is the designated talk radio spokesman for the squishy Republicans.  His assignment is to defend and make excuses for the GOP liars in Congress who promised they would stand up to the Obama regime at election time, and now refuse to do so at every opportunity.

Today he opens his show with the topic, “Is Compromise A Dirty Word?”  He regularly excoriates conservative listeners who call his show to support Donald Trump’s hard-line populist positions against out-of-control immigration, bad trade deals, and the Obama/Kerry nuclear giveaway to Iran.

Medved is even more hysterical about Ted Cruz, insisting that Cruz has “no chance of being elected” because he refuses to be bullied into submission by the intractable left and their assault on virtually all of our traditional American values.

He even goes after Dr. Ben Carson, the quiet but tough-as-nails conservative who brought down the house at an event I attended last week at Winthrop University.  A coed asked him if he was concerned about the environment.  “Of course I am,” Carson responded with his usual warm, slow smile.  “I wouldn’t allow a company to dump chemicals in a river and harm everybody downstream.  But the stuff you have been fed about “climate change” — what a bunch of CRAP!”

An exasperated caller to Medved’s show was about at the end of his rope when the establishment apologist insisted that the Republican party is dead because they refuse to compromise with the Democrats to provide more freebies to the victim groups who are lining up behind Bernie Sanders-Claus.   “Why are we the only ones who have to ‘compromise’?” the caller complained.  “The Democrats never compromise.  They hold their ground or they advance.”

Medved’s answer was stunning.  “That’s not true!  Obama wanted to raise all taxes, and end Bush’s tax cuts.  But a few of Bush’s tax cuts were left in place!”   Right, Michael.  The Democrats didn’t get everything they wanted, just most of it – and to you and your DC Republican friends, that is a compromise on their part.

They still don’t get it.  I don’t know why, but it appears that they will never get it.   Churchill, in the darkest days of World War II, rallied his weary countrymen to victory with the famous words: “Never give in — never, never, never, never, in nothing great or small, large or petty, never give in except to convictions of honour and good sense.”

What will it take to convince our “always give in” Republican officials that this time it’s important?  Obama’s Supreme Court appointee will doubtless be the exact opposite of Justice Scalia, bringing irreparable harm to the country for decades to come.

You know that liberals will howl “unfair!” if the Senate doesn’t confirm Obama’s first pick.  If the shoe were on the other foot, do you think the Democrats would give the Republicans a free pass? Frankly, I will be surprised if Obama doesn’t make a recess appointment while the Senate is out of town.

Let’s just hope that maybe, for once, our Republican senators will grow a pair and hold the line until after the election.  And let’s vow to primary out any defectors this time.

Don’t Give Up – Peter Gabriel