How long have we been trying to wake up the Republican party?  Even before emergence of the Tea Party, the mainstream “real” Americans who go to work, pay their taxes, mow their own lawns and worry about their kids’ futures were trying to express that we are fed up with the political correctness, the deceit, the secularization, the corruption, and the failed domestic and foreign policies of our government officials.  We’re sick of not being heard.  We’re tired of being lied to.  We’re sick and tired of the condescension.

Year after year we worked for candidates, contributed to campaigns and causes, studied and wrote and taught conservative principles.  It only got worse.  “They just don’t get it,” we complained to each other.  We sent officials to Washington who we thought were conservatives, only to see them melt into the cushy lap of the DC Cartel, rendered incapable of standing up to the leftist leadership, who ran roughshod over our values and our wallets.

They offered us loser McCain.  They put up loser Romney.  They gave us Speaker Boehner, and Justice Roberts and Leader McConnell and Speaker Ryan.  They refused to stop funding for Planned Parenthood and to keep nukes away from Iran.  They funded opposition to conservative candidates. They stood by and silently watched the president abandon our allies, and condoned his military “shrinkage”. They would not defend our constitution or our borders. They signed off on one porky CrapBurger budget after another, ballooning our debt.

Now, finally, the CrapBurgers have hit the fan.  We actually have two presidential candidates, Cruz and Trump, who are not in the pockets of the Cartel.  And the Insider Republicans are FREAKING OUT.

It’s a  pathetic sight.  Today the Insider Republicans trotted out Romney, the guy who couldn’t even match up against the worst president in our nation’s history, to try to bully the outsider candidates who now threaten their DC cocktail party invitations.

Listen to Romney and the Insider Republicans bashing the challengers:  “You’re a RAAAACIST!  You’re a nasty rich guy taking advantage of little old ladies!  You hate women and the handicapped!  You are an intolerant Christian!  You hate the poor and the immigrants!  You hate gay people!  Racist! Racist! Racist!” 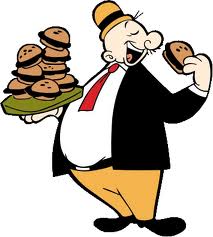 They still don’t get it.  They know their very existence is threatened, but they don’t know why, and it looks like they are incapable of understanding or change.

It’s time to start over.  And it’s way past time for the Insider Republicans to stop asking me for money every five minutes.  I will NOT pay you Tuesday for another CrapBurger today!

to the tune of CheeseBurger in Paradise
(apologies to Jimmy Buffet)