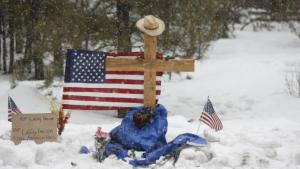 A memorial for Robert “LaVoy” Finicum is seen where he was shot and killed by law enforcement on a highway north of Burns, Oregon January 30, 2016.  REUTERS/Jim Urquhart

It has been a month since the standoff in Oregon between ticked-off ranchers and federal officers began.  I have been following the story closely, uneasily, just like the many similar stories before it.  The conflict between landowners in the western US and the feds has been boiling for a long, long time.

The plot usually goes like this:  A family works hard on their land, raising their children, being good citizens, paying their taxes and generally minding their own business.  They are good neighbors and watch out for each other.  They serve on the school board and the church steering committee.  They are careful stewards of their land, because it provides their home and livelihood.

In the rural West, people get along with each other.  They have to.  When there may only be a hundred people within thirty miles of your home, you learn to be civil, respectful, helpful and friendly.

Then one day a federal agency shows up, uninvited, with a truckload of rules cooked up in a faraway office building by activists and lawyers, on a mission that defies logic.  These are not people with names, like your neighbors.  Their authority comes from their initials: BLM, FWS, EPA.  Nobody elected them.  They can’t be fired.  They can’t be taken to court, at least with any reasonable expectation of results, because they can line up taxpayer-funded lawyers until hell freezes over.  They don’t have to make sense.

A Wyoming rancher is fined $16 million by the EPA for building a stock pond on his own land that was carefully planned and approved by the state.  The water leaves his property cleaner than when it came in.

Spurred by activists, the feds relocate Canadian gray wolves to Montana and other states, where they reproduce wildly, destroying elk herds, and wreaking havoc on privately owned livestock and pets.

BLM officials close roads that provide access to private property.  They disallow forest management on private land which results in raging fires.  They usurp generations-old water rights, and claim control over ditches and sloughs as if they were “navigable waterways”.  They relocate bison to open rangeland over the objections of nearby landowners.

The federal agencies just can’t seem to stop poking landowners in the eye.  And when proud, independent ranchers get pushed against the fence enough times, they stiffen up.  The Bundy family in Nevada had a standoff against federal officials when their grazing rights on adjacent federal land were surreptitiously changed.  Dwight Hammond and his father, Steven, had dustups with the BLM over controlled burns for pasture management.  When they set a backfire to protect their winter range against an oncoming fire, it jumped onto federal land and burned a small parcel, resulting in their arrest for arson.  They served a three-month sentence, but another judge later added five years for mandatory sentencing under an “anti-terrorism” act.

Then a group of upset ranchers, including the Bundys, seized a federal wildlife refuge building to stage a protest about the treatment of the Hammonds and others.  Another three-letter group – the FBI – soon arrived at the scene.  Video footage shows officers (FBI and/or state police) shooting Lavoy Finicum, one of the ranchers, to death as he stood outside his vehicle with his hands up.  A passenger in Finicum’s vehicle claims officers fired “at least 120” shots into the Suburban, and Ammon Bundy was hit in the arm.

It seems that encounters with officers are becoming increasingly deadly.  Only weeks before, Idaho rancher Jack Yantis was called by the Adams County sheriff to “put down” his bull which had been hit by a vehicle on a nearby highway.  As he was about to mercy-shoot the bull in the head, Yantis was pulled away from behind and shot to death by deputies.  His widow says it was cold-blooded murder.

The right to own and enjoy the unfettered use of private property may be the single biggest factor in our nation’s success.  There would be a lot less conflict if the government would leave private landowners alone, and also if more land was owned by the private sector – 65% of all land west of Denver is owned by the federal government.

Yep, Canadian Burton Cummings still wants to share the land with everybody.  Let’s send the BLM his way!